You are here: Home / Episodes / He Was So Different- Yoshitaka Fujinami 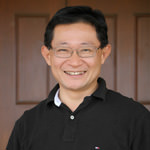 Yoshitaka Fujinami grew up in Japan. He met a medical student who’s lifestyle impressed him, it peaked his curiosity. Here’s what happened. Yoshitaka’s friend, Kaji, responded to an by saying that he doesn’t go to any shrine or temple to worship because he is a Christian. Kaji continued to reach out to Yoshitaka, a teen. When Yoshitaka experienced failure, Kaji was there for him. Eventually, Yoshitaka gave his life to Christ. He graduated from Dallas Theological Seminary and is a pastor today.

Jesus taught about being like salt in Matthew 5:13. Kaji was salt that made his friend thirsty for the living water of Jesus. Are you salty? Jesus quenches thirst like no other.